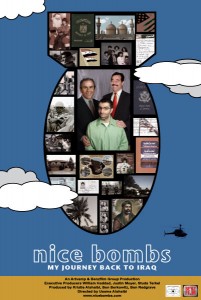 On February 9, 2016 filmmaker Usama Alshaibi’s newest documentary American Arab premieres on America Reframed. As a new promotion, Artvamp is now offering an educational edition of his previous film, Nice Bombs, along with public performance rights. See below for purchase information.

Synopsis
In Nice Bombs, filmmaker Usama Alshaibi returns to Baghdad to reunite with his family after nearly 24 years. This documentary navigates through his unique relationship to an Iraq that is much different than the country of his childhood. Usama captures the conflicting reactions to the conditions of life in Baghdad. Through a wide range of opinions and experiences he provides a broad panorama of voices long neglected under Saddam’s regime. His cousin Tareef enters the room upon hearing an explosion. “It’s a bomb. A Nice Bomb,” he explains. The phrase is indicative of his family’s nonchalance about their situation. As one young boy put it, “We’re Iraqis. It’s normal.” With humor and resilience Nice Bombs explores Usama’s dual role as both Iraqi and American.

New York Sun
“Loaded with candid conversations and opinions about the hot-button issues of war, terrorism, and Islamic extremism,’Nice Bombs’ offers many different Iraqi and American points of view and portrays a time and place of nightmarish complexity.”
– Bruce Bennett, NEW YORK SUN

PopMatters
“I was born in Iraq,” says Usama Alshaibi, “and was recently sworn in as a citizen of the nation that was now attacking it.” At the start of his documentary, Nice Bombs, it’s March 2003, and Alshaibi is safe in Amsterdam, honeymooning with his new wife Kristie. On TV, protests against the war are loud and numerous, followed by the seemingly unavoidable invasion. Within weeks, when Usama and Kristie are back home in Chicago, the Saddam Hussein statue falls and looting commences. Alshaibi observes, “I had a feeling that the news I read and saw was not telling me the full story.”
– Cynthia Fuchs, PopMatters, July 18, 2007

Time Out Chicago
When Studs Terkel urges you to do something, you do it. “He sort of put me on the spot,” recalls Usama Alshaibi, who was working at the Chicago History Museum as a sound engineer when his project sparked Terkel’s interest. It was January 2004 when the legendary author and historian came into Alshaibi’s office and asked about his family in Baghdad. Alshaibi replied, “Well, I have this idea about going to Iraq and interviewing my family….” And that’s what set Terkel off. “He said, ‘You have to go!’ ” Alshaibi says. “He pulled out his checkbook and gave me my first donation.
-Jason Mojica, Time Out Chicago August 10, 2006

Alshaibi does something so simple yet, sadly, so neglected: He lets a Western audience see Iraqis not as crazed Middle Easterners shouting and shooting (and dying) en masse, but as individuals going about their daily lives–shopping, listening to the radio, hanging out. Those shared-humanity moments make all the more compelling the postscript phone call, in which Tareef tells Alshaibi that, since his visit, Iraq has gone from tolerably bad to almost irredeemably worse.
-Time Out Chicago, Novid Parsi, August, 2006

Chicago Reader, Critic’s Choice
“Chicago filmmaker Usama Alshaibi grew up in Iraq and the U.S., and although he recently became an American citizen, his personal video documentary has plenty to say about the day-to-day existence of his Baghdad relatives, whom he visited in 2004. Distance tends to simplify our view of anything, and this video humanizes the situation on the ground mostly by complicating it: in a voice-over Alshaibi says he’s often asked what “”the Iraqis” think, but by the end this question has become as meaningless as asking what “the Americans” think. Much of his previous work has been experimental, but this becomes formally adventurous only near the end, as he converses by phone with a cousin who tells him how much worse the situation has grown this year.”
-Jonathan Rosenbaum, Chicago Reader

Chicago Tribune
“In early 2004 Chicago filmmaker Usama Alshaibi returned to his native Iraq with his wife, producer Kristie Alshaibi, and his camera. He had been away for nearly a quarter-century. The result is a surprisingly warm first-person video diary, blending a series of reunions with Alshaibi’s vast array of relatives and footage of the bazaars, streets, homes and everyday perils of life in post-Saddam, mid-occupation and mid-chaos Iraq.”
-Michael Phillips, Chicago Tribune

Policy
This educational edition of Nice Bombs comes with Public Performance Rights, exclusively available for purchase to schools, universities, libraries, and other educational institutions. A purchase grants the institution the right to screen the film to its students and faculty, on campus or school grounds, where no admission is charged, or to loan out the DVD to public library patrons. These rights are valid for the life of the DVD.

For all other types of screenings, including public screenings, or if you have any questions, please contact us directly at store@artvamp.com.

A Classroom Rental is valid for a one-time screening in a classroom setting. We will send you the DVD approximately one week prior to the screening, and you will be responsible for returning the DVD to us following the screening.

Your Order
Orders may be placed directly through the website, by clicking the button above. We can also receive orders via email, and we accept institutional purchase orders. We accept all major credit cards, or check payment for institutional orders. Checks should be made out to Artvamp, LLC

Shipping
All orders are shipped from Boulder, Colorado. Please allow 2 weeks for processing and delivery of your order.

Speaking Engagements
If you are interested in having director Usama Alshaibi speak at your school, library or event, please contact him directly at usama.alshaibi@gmail.com.