“I’m taking a cue from Caveh. I’m going to sit here and tell you all about it.”

Here are my video reflections on the making of Other People’s Mirrors (transcript below).
And WATCH THE MOVIE HERE.

Caveh Zahedi is one of my favorite filmmakers. For those who don’t know, he’s made films like I Am A Sex Addict, Tripping with Caveh, In the Bathtub of the World. He appeared in Waking Life. Even if he’s not a household name, he’s the kind of filmmaker that other filmmakers know about. Even Alison Bechdel, who came up with the imfamous Bechdel Test for films, did a cartoon about Caveh called Is Caveh Zahedi God?

And now he’s doing a TV series called The Show About the Show. 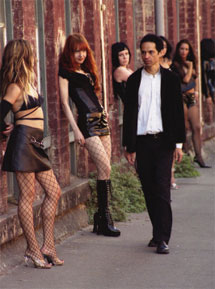 Anyway what has always interested me about Caveh is his confessional documentation of life mixed with re-eneactments. He’s very persistent in his efforts to remain authentic and examine the self, and sometimes it makes others really really uncomfortable. He’s the ultimate in oversharing.

Anyway, I met Caveh right after his film I Am a Sex Addict came out in 2005. I was at The Tribeca Film Festival, and my husband was receiving an award for our documentary, Nice Bombs. We saw I Am a Sex Addict, and at the time I was a sex worker, and so Caveh’s fascination with sex workers held a particular interest for me. Later he came to hang out with us in Chicago while showing his film to a sex addicts support group there, and I ended up interviewing him for a magazine called $pread.

Which brings me to why I admire him so much, and why I’ve told my husband that he’s basically the male and much more successful version – of me!

Rewind to 1998. I began writing the outline of my first feature film, Other People’s Mirrors. To understand OPM, you have to understand the structure that I had INTENDED for the film but that morphed into something totally different. It was supposed to contain three levels of experience. 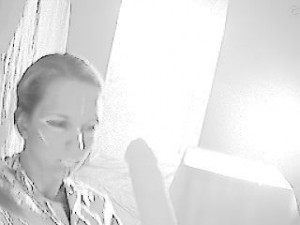 a performance as Echo

The final layer of experience was going to be me, using the stories as a template to go out and try to enact these scenarios in the real world, and to have a documentary cinematographer follow me as I do so.

At the time Ana Voog and Jenny from Jennycam were the best known internet celebrities, back when the internet was young. And Ana was doing stuff on her 24/7 live web cam that I found really inspiring. Her body was her art! Her images were amazing. 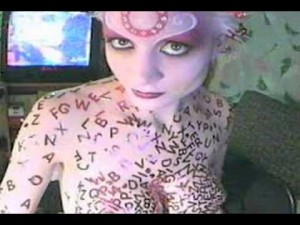 I had wanted Ana to play Echo in Other People’s Mirrors, but she declined. She wasn’t comfortable doing scripted work, or not having 100% control of her image. So I befriended another young woman who was also doing cam shows. Her name was Melissa, and she went by the name Shakti. She later called herself Beautiful Toxin and now she’s known as author Melissa Gira Grant, who wrote the book Playing the Whore. Anyway after a mushroom trip in Northern California, which doubled as a screen test, I gave her the role. Minds were melded, fears confronted, and contracts were signed (all on web cam of course). I write more about it in my on-line memoir Secret Colony of One.

Melissa was smart and self-protective ad we’d talk a lot about her limits and she wanted lots of reassurances that she would be respected while doing some pretty outlandish sexual acts on camera. And one day, I was having a terrible bout of PMS, and we were going over the expectations, and she was voicing some misgivings about some particular scenes.

Something happened in me, and I cannot explain it. I think I was stressed because one of my grad advisors in the film department at the School of the Art Institute was questioning every aspect of the project and suggesting it may cause me mental illness to put myself in these situations.

Anyway, in a fit of annoyance at everything, I said, “Look I’m not going to mother you through this, Melissa. Either do the role or don’t.”

Yeah, wrong move. It’s not like I was paying her a ton of money to do this. She was doing it because she liked what I was doing and trusted me. That trust was shattered in a matter of seconds. Because I had PMS, and I was upset at my grad advisor.

She pulled out of the project. And I was left without my lead just weeks before shooting. And so, I morphed two aspects of the movie experience into one, and a split happened in me from which I’ve never recovered.

I had to do the fictional role of Echo myself. And I had to skip the documentary aspect. I would play Echo,stage everything, with lots of improv, and shoot the whole thing against the backdrop of the city of Chicago with no permits or permission. 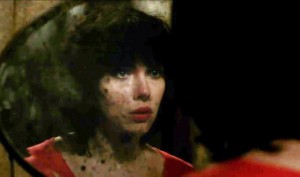 There has been a movie made recently that did most of this quite successfully called Under the Skin. That movie made me really happy. The almost expressionless alien female on the sexual prowl, followed by a male observer or helper figure, set against a background of the real world, shot with hidden cameras. Setting aside the obvious parallels found in VonTrier’s romantic catalogue of perversities called Nymphomanic, which also came out in 2014, Under the Skin is the only film that exemplifies exactly the concept and methods that I was after, only streamlined and much better executed.

But the result in me, in writing, directing, starring and editing OPM, while exhibiting myself on the web the entire time, was a sort of split as I said. My grad advisor was right, in a way. In the process of being watched all the time by an audience, and in the process of playing this role – I became Echo. And Echo became an escort, and the film and the web presence became a marketing device for getting more clients. And sex work took over my art practice and dissolved any objectivity I might have had in the beginning of this whole process. I saw myself as the product, rather than the work as the product. 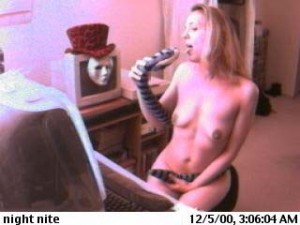 It’s only now, nearly 20 years later, that I can look back and say “Shit, what the hell happened there?!” Now I know why my art practice suffered. And I know why I’m not as successful as Caveh, and why I didn’t make anything nearly as good as Under the Skin, and why I have, in a sense become a little bit paralyzed at times from moving forward with my ideas.

Anyway, the good news is, everyone I worked with while making OPM are doing well. My DP, Richard Bluestein, who had never shot a feature in his life before OPM, went on to create his own on-line persona called Madge Weinstein, who’s had a very successful podcast for years now. Melissa has published a few books and lots of articles and has become an advocate and activist for sex workers rights. My BFF, who back then was calling himself Witchdoctor and putting out CDs, and who played one of the main characters, while at the same time acting as Producer on the project, is now Ceven Knowles who runs Cerus Media in Berlin and has done a lot of fantastic films and music videos of his own.

And I became a producer, and supported my husband’s film career, which has taken off and he’s gotten into big film festivals and has broadcast his work on Sundance and PBS.

But I don’t think I’m done. I’m still figuring this out. I have lots of ideas and just trying to find way to accomplish them. I kinda feel like I’m starting from scratch all over again. But now I know enough NOT to snap at an actor or, most of all, not to forget my vision. So there’s that.

I’ve just released Other People’s Mirrors for the first time as download or rental. Movie extras include two short films, “Blood” and “Crying” edited from the movie’s raw footage by Usama Alshaibi. Also included are the auditions for the gang bang scene, held at the School of the Art Institute of Chicago, and captured and edited into a funny short by the film’s DP, Richard Bluestein.

Synopsis
In a pseudo sci-fi trip of pornographic proportions. In Other People's Mirrors, the camera feels like an extension of the unstable characters it is following, taking on a near-home-movie style documentation of street performance and improvised art. It centers around the journey of Echo Transgression, a schizophrenic sex addict, who believes that if she follows the instructions being transmitted directly into her spine, then she will escape to her own version of nirvana. Underground legend Nick Zedd plays the alien phantom of Narcissus, a secret agent who makes sure she stays on course.